The Difference between Roborock S7 and S7+

The only difference between these two models is that the Roborock S7+ comes with an auto emptying dock while the Roborock S7 does not. Other than the dock that comes in the box, the two machines are identical. The S7 comes with a much smaller dock that only serves as a charging station. The S7+ comes with a larger auto-emptying base that has a suction motor and large dustbin to remove dust from the robot when it docks.

Amazon has a nice discount on the Roborock s7 today!

The two robots are the same in all other aspects. Let’s take a look at some of the similarities.

Similarity 1: They both have the new vibrating and retractable “VibraRise” mop.

VibraRise is a new feature Roborock introduced with the S7/S7+. “Vibra” refers to the vibrating arm that controls the mopping pad. As the robot cleans, it moves the mopping pad left and right at high speed (3,000 times per minute according to Roborock) to “scrub” the floor, achieving a deeper clean than what you get from just dragging the pad across the floor.

“Rise” refers to the fact that the S7 and S7+ will detect when it comes across carpet and retract/raise up the mopping pad a little (5mm to be exact) to avoid getting the carpet wet. The sonic sensors on the bottom of the robot constantly scan the ground and will raise up the mop whenever it thinks it’s on a rug or a carpeted section of the house.

This new mop is the biggest improvement in the S7. Instead of having to avoid carpeted areas,  you can now let the S7/S7+ clean your entire house without worrying that your carpet or area rugs might get wet.

Similarity 2: They both have the new all-rubber brush roller.

The S7/S7+ is the first Roborock to have an all-rubber brush roller. All Roborock vacuums before this use the half-bristle, half-rubber roller design. The all-rubber brush is more durable and less prone to hair tangles. This is great if you have pets that shed, as you’ll spend less time untangling hair from the brush. Longer-length hair will still wrap around the roller and have to be manually removed though. Similarity 3: The brush roller now floats and is free to pivot.

Another innovation in the S7/S7+ is the floating brush design. All models before this had the brush roller in a fixed position, at a predetermined height away from the ground.
The S7/S7+’s brush roller is now floating and freely pivots. This allows the brush to adjust itself depending on the surface. It hugs the ground more tightly, allowing for the suction generated by the motor to be applied exactly where it’s needed.

Similarity 4: The onboard water tank is electronically controlled.

Older Roborock vacuums have a gravity-based water tank, where the water continuously drips onto the mopping pad to keep it wet as it mops.
In contrast, the S7/S7+ are equipped with an electronic water tank, allowing you more granular control over how much water to dispense onto the mop. For hardwood floors that may be susceptible to moisture, you can tell the robot to use less water. For surfaces that are not afraid of moisture, such as tile or laminate, you can use more water for a better clean. As with all modern Roborock vacuums, the S7/S7+ use LIDAR to create a precise map of your home. Using the app, you have a lot of options of tell the robot where you want to clean.

Since the S7/S7+ can raise its mopping pad, you can also set no-mop zones for areas that you don’t want to be mopped. The carpet sensors onboard should already prevent mopping on carpeted areas, but you can use this as a failsafe or for hard surfaces where you don’t want the mop to clean.

You can also name the different areas of your house (e.g. Kitchen, Bathroom, Kids Room) and tell the robot which areas to clean and when.

Which vacuums are the Auto-Empty Dock Compatible with? The S7 auto-empty dock is only compatible with the Roborock S7 and Roborock S7 MaxV. It does not work with other Roborock vacuums/mops.

Does Roborock S7 vacuum and mop at the same time? What about the S7+?

Yes, the S7 vacuums and mops at the same time, in one go. The rubber rollers of the vacuum are located in the middle of the robot, with the mopping pad directly behind it. In every cleaning pass, the robot goes over the floor with the vacuum, then immediately followed by the mop.
The exception here is when carpet is detected, in which case the S7 will raise up its mopping pad and leave only the vacuum running.
Since the base machine of the S7+ is exactly the same as the S7, it also vacuums and mops at the same time.

Does the Roborock S7 have a HEPA filter?

Does the Roborock S7 have obstacle avoidance? No, neither the Roborock S7 nor the S7+ have true obstacle avoidance. These two models use the top-mounted LIDAR unit to detect objects and map your room, and is therefore unable to “see” objects that are below the LIDAR unit.

For true obstacle avoidance, you would need to look to the Roborock S7 MaxV, which is equipped with a front camera. The S7 MaxV is good if you have lots of small, loose objects on the ground or indoor pets that may accidentally make a mess on the floor. The S7 MaxV will be able to detect these objects using its front camera and stay away.

Conclusion: Which one should you buy?

Did you know that you can purchase the Roborock S7 and the auto emptying dock separately? In fact, this is what I would recommend if you are not sure whether you’d need the S7+ over the S7.

Since the price of buying the robot and the auto emptying dock separately is the same as buying them together as the S7+, it makes sense to go without the dock first to see if you even mind manually emptying the bin.

If after a couple of weeks you find that emptying the bin after every clean to be an unbearable chore, then you can purchase the dock at that point and still end up paying the same price. 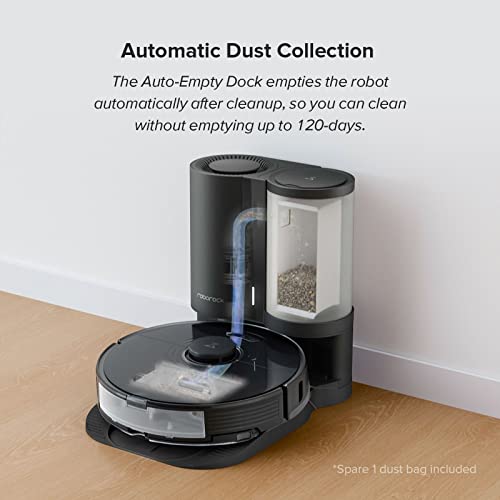 The Roborock S7+ is the better choice only if:

You know that you need the auto-emptying dock and want to avoid the hassle of buying the dock later.

The Roborock S7 is the better choice if:

You want to save money and you think you might not need the self-emptying base. You can always upgrade later by purchasing the dock separately.