What are the differences between Roomba i3 and s9?

The Roomba s9 uses a camera to navigate, whereas the i3 does not. The s9 is able to clean specific rooms, the i3 cannot. The s9 has the keep out zone feature, but the Roomba i3 has to rely on accessories to keep away from an area. The s9 has a wider brushroll and can reach corners better than the i3.

The Roomba i3 vs s9 are two of the most popular robot vacuums on the market today. This article will compare them and help you decide which one would be best for your needs. They have some major differences that could make one much better for your needs than the other. Continue reading to learn more.

Difference 1. the Roomba s9 has a camera, the i3 does not. The s9 is equipped with a camera for visual navigation. The camera allows the s9 to accurately map your home without drift over time.

The i3 is also able to map your house, but it does so without the use of a camera. Instead, it uses ground tracking sensors to map your home.

Both are able to vacuum your floors in a logical pattern. Unlike older random navigation robot vacuums, the s9 and i3 will clean your floors like a human would.

Of these two methods, s9’s mapping is slightly more advanced, but both do a good job of smart navigation. In terms of everyday use, it doesn’t make that big a difference between having and not having a camera.

The s9 has stronger suction than the i3. iRobot’s specs say that the s9 has 40x the suction of a baseline Roomba, whereas the i3 only has 10x.

The s9 has more cleaning power than the i3, but it’s not so much that it makes a huge difference in everyday use. Both of these Roomba models have enough suction to keep your floors clean, whether it’s a hard surface or carpet, so you won’t be disappointed either way.

Difference 3. The s9 has specific-room cleaning, the i3 does not. One of the advanced features only available on the s9 is the ability to specify which rooms to clean.  The s9 will clean the room you tell it to, whereas the i3 is not able to do this, and will clean the entire house.

This is only an advantage if you want your Roomba to focus on one or several rooms. If you are ok with the Roomba cleaning your entire house every time, the feature is overkill.

Difference 4. Roomba s9 has keep out zones, the i3 does not.

Keep out zones is a feature on the iRobot app where you can draw areas on your floorplan to tell the s9 to stay away from. This is useful for keeping your Roomba out of certain areas, like a pet bowl or vase.

The i3 does not have this feature. If you have to keep certain areas off limits, you can use a virtual wall accessory instead. It does the same thing as keep out zones by sending out a signal to the Roomba to stay away. Just place the virtual wall where you don’t want the Roomba to go.

Difference 5. The s9 is D shaped and has wider brushrolls, the i3 is round with shorter brushrolls. The s9 has a wider brushroll than the i3. The s9’s brushroll is designed for to cover an area more efficiently, requiring fewer passes because a wider path is cleaned each time.

The D shape of the s9 allows it to get ever-closer to corners, whereas the round i3 relies on the corner brush to sweep hard-to-reach dirt into the suction path.

Let’s take a look at their similarities.

Similarity 1. Both the i3 and s9 have smart navigation.

In my experience, smart navigation is one of the most important features a robot vacuum should have. Without it, the robot will just bounce around your home mindlessly wherever it likes. Smart navigation gives the robot a decisive cleaning path that efficiently covers your whole house.

Similarity 2. Both have recharge and resume

Both Roomba models can recharge themselves when they are low on power, then get back to where they left off until the whole floor is cleaned. This means battery life is not an issue no matter how large your home is. You can start the Roomba when you leave your house and by the time you get back, your floors will have been completely cleaned.

Similarity 3. Both have anti-tangle brushrolls 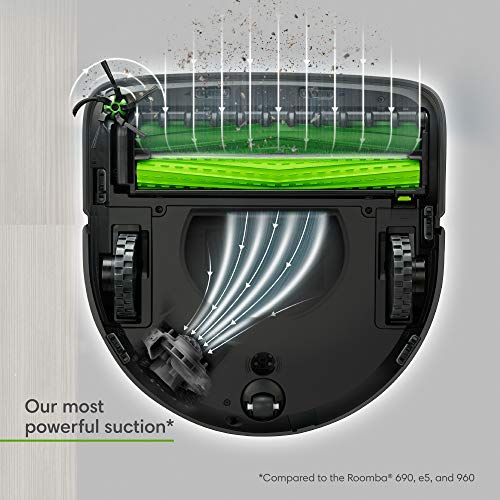 This prevents hair and other debris from wrapping around the brush, thereby reducing maintenance considerably.

With the “plus” models, you no longer have to empty the dustbin manually. Instead, after each clean, the dustbin of the robot will empty into the disposal bags located in the homebase.

That’s the only difference between the regular and plus models. In other words, everything else in this article is true and applies to the Roomba i3+ vs s9+.

The s9 has more suction power and can clean in specific rooms while the i3 does not have these features. However, both come with smart navigation that makes it easy enough for anyone to use them without worrying about battery life. Ultimately it comes down to a budget issue, and I think the i3 will suffice for most households. If money is no object, then the s9 is the superior vacuum. It’s better, but not so much that it justifies the additional cost. For those on a smaller budget I recommend the i3.