In a nutshell, what are the differences between the Roborock Q5 and the Q7?

Difference 1: The Roborock Q5 only vacuums, while the Q7 vacuums and mops. The Roborock Q7 is designed to mop your floors as it vacuums, as it has an onboard water tank with a mop module.

However, the Q5 does not have any mopping capabilities and can only vacuum.

This is the biggest difference between the two robots.

You probably have a good idea whether you need mopping or not in your home.

In general, the Q7 is the better choice if you have a busy lifestyle and you don’t have time to mop your floors yourself often.

However, if you don’t need mopping or prefer to do it yourself, then the Q5 is the one for you. It’s also a great option if you have a lot of carpeted floors because you won’t have to worry about your robot vacuum’s mop getting the carpets wet.

Difference 2: The Q5 has a standard bristle brush, while the Q7 has an all-rubber roller brush. While a bristle brush can work efficiently with dust and various kinds of debris, hair and fur tend to get tangled into the bristles.

Removing all that hair and fur can also take time and can be inconvenient.

However, you won’t have this problem with the all-rubber roller brush. It doesn’t have bristles for hair to get tangled in, so it’s easier to clean.

The rubber roller is designed to ensure consistent cleaning on uneven surfaces. It also works on carpet better and pulls out fewer microfibers.

With its rubber brush, the Q7 is easier to maintain and keep clean compared to the Q5. It’s thus the better choice if you want a robot vacuum that needs less maintenance.

Difference 3: The Q7 has a larger dustbin than the Q5.

The Q7’s dustbin has a volume of 750 ml and is significantly larger than the Q5’s 470 ml dustbin. If you don’t have the Auto-Empty Dock Pure, you won’t have to empty its dustbin as often as you’ll have to empty the Q5’s.

It’s also important to note that the Q7 has a gravity-fed 180 ml water tank. Because the water tank is gravity-fed and not electronic, there’s space for a larger dustbin.

The Q7 has the largest dustbin of all Roborock robot vacuums so far. If you want a robot vacuum that needs less maintenance, then the Q7 is a good choice. It’s also the better option if you don’t want to spend extra on an auto-empty dock.

Similarities between the Roborock Q5 and the Q7

Similarity 1: Both models are compatible with the Roborock Auto-Empty Dock Pure.

Roborock’s Auto-Empty Dock Pure is a docking station that can automatically empty the Q5 and Q7’s dustbin after every cleaning session. This way, you won’t have to empty your robot vacuum’s dustbin yourself. The dust and dirt will go straight into the dock’s own bin, which you’ll only need to empty every two months or so.

It’s important to note, however, that the Auto-Empty Dock Pure is sold separately from the Q5 and Q7. It’s thus an additional expense if you want the convenience of having your robot vacuum’s dustbin automatically emptied for you.

However, if you purchase the Q5+ or Q7+, the Auto-Empty Dock Pure will be bundled in with the robot vacuums.

Similarity 2: Both models can create and save maps of your home.

The Roborock Q5 and Q7 both have LiDAR navigation that can help them find their way around your home and clean more efficiently.

They will also scan your home and produce maps that you can use to check out cleaning routes, set no-go and no-mop zones, draw invisible walls, create cleaning schedules, and more. 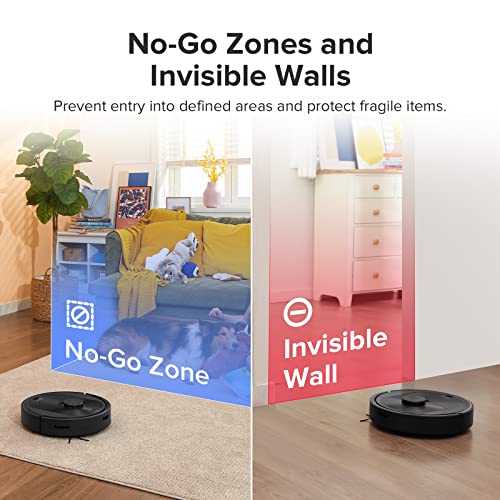 Both robot vacuums will also be able to save a copy of these maps so they won’t have to take the time to scan your home each time they start a cleaning session. You’ll be able to access these maps at any time on the Roborock app.

Additionally, if something goes wrong, you’ll be able to see where your robot vacuum is right away. You’ll thus be able to address or fix any issues that may be going on with your vacuum.

Similarity 4: Both models can provide you with 3D maps.

While the Q5 and the Q7 can both create 2D maps of your home, they can also create 3D maps. The 2D maps provide you with a bird’s eye view of your home’s layout as well as the robot vacuums’ cleaning routes. You’ll be able to track where the vacuums are in real time, and you’ll also see where any no-go zones, no-mop zones, and invisible walls are.

Other than these things, however, the 3D maps aren’t too different from 2D maps in terms of function.

Similarity 5: Both models can adapt their cleaning routes for the best results.

The Q5 and the Q7 will automatically figure out the best cleaning route for each room or area they’re scheduled to clean. They’ll consider the size and shape of the room, as well as the location of obstacles, to calculate the most efficient route that will enable them to cover as much floor area as possible.

Both vacuums also clean in a tight Z-shaped pattern. They won’t glide around randomly and only switch directions if they bump into something. This way, you can be sure that they won’t miss a spot and that they’ll be able to clean as much as they can. Because the vacuums adapt their cleaning routes, you can expect them to have different routes for the different rooms of your home.

You’ll also be able to create custom cleaning schedules if you only want specific areas in your home to be cleaned at specific times. For example, you can schedule the dining area and kitchen to be cleaned after mealtimes, and the living room and bedrooms after you and your family leave for school or work.

Additionally, you can select specific rooms for cleaning outside of scheduled cleaning sessions. For example, if there’s an accidental spill in the kitchen or you’ve tracked mud into the foyer, you can program these robot vacuums to clean only those rooms specifically.

Similarity 6: Both models can be controlled via the app, voice commands, and physical buttons. The Roborock app allows you to have complete control over the Q5 and Q7. You’ll be able to access and use the saved maps, program no-go zones and no-mop zones, adjust the suction power, pick out specific rooms for selective cleaning, and more.

You can also link these robot vacuums to Google Home and Alexa so you’ll be able to give voice commands. Voice commands can be particularly useful if you’ve got your hands full, and you can start and end cleaning sessions by simply telling the robot vacuums what you want them to do.

Both of these vacuums also have buttons that you can use to turn them on and program certain functions. However, you won’t be able to do as much with these buttons as with the app.

Similarity 7: Both models automatically recharge when their batteries run low.

The Q5 and Q7 both have a maximum runtime of 3 hours. However, they can run out of battery sooner depending on the cleaning settings you use. For example, higher suction power settings can shorten the robot vacuums’ battery life.

If these robot vacuums start running low on their battery power in the middle of a cleaning session, they will return to their docks and recharge before they completely run out of power. Once they’ve recharged, they’ll go back to where they left off in their cleaning session.

The auto top-up feature is particularly handy because you won’t have to worry about making sure that your robot vacuum is charged. You also won’t end up coming home to a half-cleaned house and a dead robot vacuum.

How many filters come with the Roborock Q5?

The Q5 only comes with one filter, which is washable. You’ll thus be able to use this filter for an extended period. However, it’s not permanent and will need to be replaced eventually. You’ll be able to buy replacement filters from Roborock.

Does the Roborock Q5 have Google Home integration or just Alexa?

The Roborock app works with Google Home, Amazon’s Alexa, and now also Apple’s Siri. You can link the robot vacuum to these systems using the Roborock app.

No, the Q5 can be controlled only by one Roborock account. If you want multiple people to be able to control the robot vacuum, you can install the Roborock app on multiple phones and use the same account for all of them. No, the Q7 does not have a camera. It relies on LIDAR navigation to move around your home. It also does not have the same object recognition capabilities as the Roborock robot vacuum models that have cameras.

Can the Roborock Q7 vacuum and mop at the same time?

Yes. However, if you want the robot vacuum to just vacuum without mopping, you can take off the water tank and mop module.

The Roborock Q7 can both vacuum and mop, but the Q5 can only vacuum. The Q7 is best for busy households that need the convenience of a robot vacuum with a mopping function. However, if you have a lot of carpeted floors or you prefer to do the mopping yourself, then the Q5 is a good enough machine.

If you want a robot vacuum that won’t need much maintenance, the Roborock Q5 will likely be able to meet your needs. If you also purchase the Auto-Empty Dock Pure, the Q5 will automatically empty its dustbin into the dock after every cleaning session.

Meanwhile, if you want a robot vacuum that can not only vacuum and mop, but has a large dustbin as well, then the Q7 is the way to go. You can also buy the Auto-Empty Dock Pure separately if you wish to add auto-emptying to the Q7.