In a nutshell, what are the differences between the Roborock Q7 and the Q7 Max?

Difference 1: The Roborock Q7 Max has an electronic water tank, while the Q7 has a gravity-fed water tank. Because the Roborock Q7 Max’s water tank is electronic, you’ll be able to control the flow of water.

You won’t have the same options with the Q7 because of its gravity-fed tank. The water will simply flow out of the tank when it’s attached to the Q5, and it will continue flowing until it runs out. Thus, you won’t have as much control over the flow of water.

Additionally, the Q7 Max’s 350 ml water tank is larger than the Q7’s 180 ml tank. The Q7 Max can thus mop a larger area than the Q7 unless you keep refilling the Q7’s tank.

In terms of mopping, the Q7 Max is the better choice. Not only can it mop a larger floor area, but you’ll also be able to easily control the water flow through the Roborock app.

Difference 2: The Q7 has a larger dustbin than the Q7 Max.

The Q7 has a 750 ml dustbin, while the Q7 Max has a 470 ml dustbin. This means that the Q7’s dustbin can hold more dirt and debris and won’t have to be emptied as often as the Q7 Max’s dustbin.

If you don’t want to spend on the Roborock Auto-Empty Dock Pure, which can automatically empty both the Q7 and Q7 Max’s dustbins, then you might consider the Q7.

However, if you prefer to have an electronic water tank that allows you to control the flow of water for mopping, then it’s better to go with the Q7 Max.

Difference 3: The Q7 Max has a spring-loaded mop module, while the Q7 does not.

Robot vacuums without this feature have inconsistent mopping because as their water tank loses water and gets lighter, the mop module eases up on the pressure it applies as it wipes the floor. With less pressure, it can thus end up removing less dirt.

However, with consistent mop pressure on the Q7 Max, you won’t have to worry about the robot vacuum missing any spots. The pressure will remain the same even as the water tank gets lighter.

In general, the Q7 Max can produce better mopping results than the Q7, which does not have a spring-loaded mop attachment.

Similarities between the Roborock Q7 and the Q7 Max

Similarity 1: Both models are compatible with the Roborock Auto-Empty Dock Pure.

The Auto-Empty Dock Pure is sold separately from its compatible robot vacuums, though the Q7+ and the Q7 Max+ are versions of these robots bundled with the dock.

It can take quite a while for the dock’s bin to fill up, so you won’t have to empty it for quite some time. You’ll likely only have to empty it once every two months or so, depending on how often you want your robot vacuum to clean your house.

Similarity 2: Both models can save multiple maps of your home. The Q7 and Q7 Max are equipped with LiDAR navigation, which not only helps them move around any space but also enables them to create accurate maps of your home. These maps are quite useful and can help you program a variety of settings and features, including no-mop zones and no-go zones.

Additionally, these maps will also show you where your robot vacuum is in real-time. You’ll be able to see the vacuum’s routes, including any changes and adjustments. If there’s ever a problem and your vacuum stalls, you’ll have an idea of where it is so you can fix the issue.

These robot vacuums can also scan the different floor levels of your home and save a map of each. They can save up to four maps, so they can work well with multi-story homes. The map-saving feature also ensures that these robot vacuums won’t have to re-learn every floor level of your house at the start of every cleaning session. 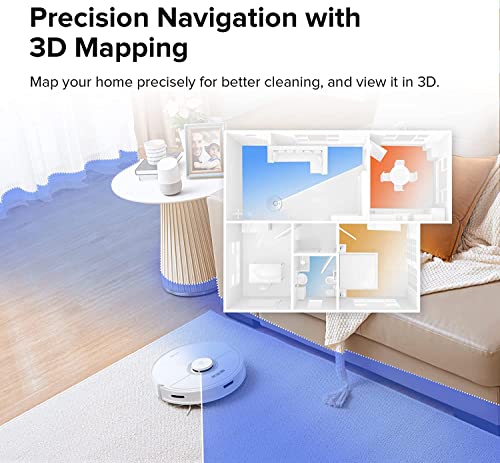 Not only can the Q7 and Q7 Max create 2D maps, but they can also create 3D maps of your home. With 3D maps, you’ll see your home as well as your robot vacuum’s cleaning routes from a different perspective. You’ll see the layout of the walls and other architectural features, and you can even place 3D representations of your furniture to get a fuller view of the way that your home is set up.

While 3D maps can be useful, they’re not much more useful than 2D maps. The 3D maps can show you how your robot vacuum works in relation to the large obstacles in the space it’s in. However, other than this, they don’t do anything that 2D maps can’t do.

Similarity 4: Both models have app and voice control.

The Q7 and Q7 Max are both compatible with the Roborock app, which allows you access to a wide range of features and settings. You’ll be able to access your home’s maps, customize cleaning routes, set cleaning schedules, draw invisible walls, and more. With the app, you’ll have just about full control over your robot vacuum.

You can also use the app to enable the selective cleaning feature. This feature allows you to choose a single area or room in your home for your robot vacuum to clean. If you spill something or track dirt into a room, you won’t have to start a full cleaning session just to clean up.

Additionally, these robot vacuums are compatible with Google Home, Amazon’s Alexa, and Apple’s Siri. You can thus use voice commands to tell your robot vacuum to start and stop cleaning, which can be helpful if you’ve got your hands full and you can’t get to the app.

Similarity 5: Both models have the auto top-up feature.

With the auto top-up feature, the Q7 and Q7 Max will automatically stop cleaning once their battery starts to run low. They’ll then return to their dock to recharge, after which they’ll go right back to cleaning.

You won’t have to worry about making sure that your robot vacuum is fully charged before starting a cleaning session. It will be able to look after its own battery consumption, and you won’t have to keep an eye on your vacuum and recharge it yourself.

You can schedule cleaning sessions any time during the day, even when you’re not at home. Because of the auto top-up feature, you won’t end up coming home to half-cleaned floors.

Similarity 6: Both models are equipped with the all-rubber main brush.

Roborock’s all-rubber main brush doesn’t have bristles, in contrast with the older bristle main brush. Bristle brushes can be quite effective, but hair and fur tend to get all tangled up in the bristles. This makes these brushes difficult to clean because hair and fur can be difficult to disentangle.

With the rubber main brush, however, removing any hair and fur is easy. All you’ll have to do is pull them out, which won’t take longer than a few seconds.

Aside from the rubber main brush, both models also have washable dustbins and washable filters. The filters can last longer than non-washable vacuum filters, but they’ll need to be replaced after some time to ensure that you have a filter that works well.

No, the Q7 does not have a camera. The Roborock models that have cameras include the S6 MaxV, the S7 MaxV, and the S7 MaxV Ultra.

Does the Roborock Q7 need wifi to map the house?

Yes. While you’ll be able to turn the Q7 on and start a cleaning session without wifi, you won’t be able to enable the more advanced features that are only available on the app.

Can you select mopping only on the Roborock Q7 Max?

Will the Roborock Q7 Max be able to go under the couch? The Q7 Max will be able to go under couches and other furniture with a clearance of around 6” to 7.8”.

Does the Q7 Max have carpet detection?

No, the Q7 Max will not be able to automatically detect carpet. If you want it to stop mopping once it’s on carpeted floors, you’ll have to remove the mop module entirely.

If a robot vacuum’s mopping capabilities are important to you, then you should go with the Q7 Max. It has an electronic tank that allows you to control the flow of water to the mop cloth, and its mop module is spring-loaded and applies consistent mopping pressure.

Additionally, the Roborock Q7 Max’s water tank is larger, and it can cover a larger floor area without needing to be refilled often.

However, if you don’t want to buy the Roborock Auto-Empty Dock Pure, you’ll likely want a robot vacuum with a large dustbin that you won’t have to empty often. The Q7’s 750 ml dustbin is the largest among Roborock vacuum dustbins, so it won’t fill up easily.

If your robot vacuum’s vacuuming function is more important to you than its mopping function, then the Roborock Q7 will be able to give you what you need.