In a nutshell, what are the differences between the Roborock S7 and the Roomba j7?

Difference 1: The S7 will vacuum and mop, while the j7 can only vacuum. 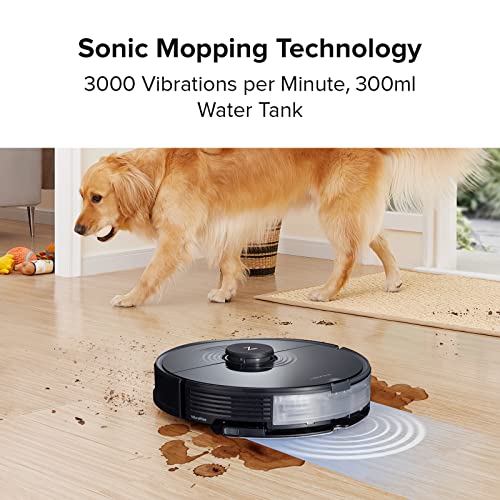 This is the main difference between these two vacuums.

Grab one of these Roomba deals before they go away. Prices may change as products go in and out of stock.

> entry level Roomba, random navigation, does not map your home

> front camera for obstacle avoidance | This is our recommended Roomba.

The Roborock S7 not only mops, it has a “sonic mop”. This refers to the fact that the mopping pad will vibrate horizontally at 3,000 times per minute, effectively scrubbing your floors instead of just wiping them with a mopping pad. This makes it easier for the robot vacuum to remove dried stains, mud, and other kinds of tough dirt.

Additionally, the S7 will raise its mop attachment when it detects carpet. Because the mop attachment is raised, the wet mop cloth won’t drag across the surface of the carpet.

However, it’s important to note that the mop only retracts about 5mm, enough to avoid low-pile carpet but not medium- to high-pile carpets.

The Roomba j7 doesn’t have a mopping function.

Note that if you like the Roomba name but also want mopping included, consider the Roomba Combo j7. That’s a newer model with mopping functionality.

Difference 2: The Roomba j7 has obstacle avoidance, the Roborock S7 does not.

Because the j7 has a front camera, it can recognize different kinds of small obstacles on the floor. These include shoes, wires, and even pet waste. The j7 is able to identify obstacles in its path and make adjustments to avoid them. You won’t have to pick up clutter on the floor before starting a cleaning session.

The Roomba j7 is great if you have pets. You might have read horror stories of the “poopocalypse” where pet waste gets smeared over the entire house by a robot vacuum. The j7 won’t touch these “obstacles” at all, so you can rest assured that this won’t happen to you. According to iRobot, the j7 can currently recognize 170 different objects and will be able to recognize more in the future.

If you have a lot of stuff on the floor, you don’t have much time to de-clutter, or you have pets at home, the Roomba j7 is the better choice than the Roborock S7 for you.

Note that the Roborock S7 MaxV is a version of the S7 that does have obstacle recognition.

Difference 3: The Roborock uses LiDAR to navigate, while the Roomba uses vSLAM.

The S7 is more precise and efficient because of LiDAR technology. LiDAR is more advanced than the j7’s vSLAM navigation, which is great for general range finding but isn’t as accurate as LiDAR.

vSLAM relies on the robot vacuum’s front camera and optical sensor, while LiDAR utilizes lasers. Using laser sensors means that light is not needed for navigation, so the S7 can work no matter the lighting conditions, even in complete darkness. Meanwhile, the j7 will need at least some light to navigate properly.

Difference 4: The j7 has dual brushless rollers, while the S7 only has one.

The main brushes of both models are designed to have no bristles. Because there are no bristles, hair and fur are less likely to get tangled up in the brushes. This makes the hair easier to remove when it’s time to do maintenance.

If you have a lot of carpeted areas in your house, the Roomba j7 is probably the better choice because it has dual brush rollers.

Difference 5: The Roomba can save more maps than the Roborock.

Both the S7 and the j7 can create and save multiple maps of your home. The j7 can store up to 10 different maps, while the S7 can only store up to four.

However, because the S7 uses LiDAR, its maps tend to be more accurate compared to the maps generated by the j7. Additionally, because it can detect carpets, it can mark carpeted areas on the maps with a different color to distinguish them from bare floors.

The S7’s maps will also let you see where the robot vacuum is in real time so you’ll be able to follow its routes on the app as it cleans.

Meanwhile, the iRobot app will allow you to customize the j7’s maps and save them under different names.

Both robot vacuums offer plenty of memory for your mapping needs and you are unlikely to run out with either.

Difference 6: The Roomba j7 has geofencing, the Roborock S7 does not have this feature. If you allow the iRobot app to know your phone’s location, it can automatically start a cleaning session when you leave the house. This way you won’t ever have to run the Roomba while you are home. You’ll just come home to a clean house.

The j7 can also start cleaning based on the actions of other smart devices in your home. For example, if your garage door opener activates, it can signify that you’re leaving your home for the day and the j7 can start cleaning.

In comparison, the Roborock app does not have this feature. Instead, you will need to manually start the cleaning session when you leave the house or set up a schedule for it to clean during a time of day when you’re not home.

For those who are very busy or don’t want to spend time configuring the cleaning schedule, the Roomba’s geofencing feature is very useful.

Similarities between the Roborock S7 and the Roomba j7

Similarity 1: Both models have a compatible self-emptying dock for purchase.

These docking stations enable these two robot vacuums to automatically empty their dustbins after every cleaning session.

No more emptying the dustbin after every cleaning session. You will, however, need to change the self-emptying dock’s dust bag about once every two months.

Both the Auto-Empty Dock and the Clean Base are sold separately. However, they’re bundled in if you get the “plus” versions of these vacuums: the Roborock S7+ or the Roomba j7+.

Similarity 2: Both models have app and voice control.

While the Roborock app has more features than the iRobot app, both allow you to have a lot of control.

Your phone and robot vacuum will both need to be connected to your home’s wifi network so the apps can talk to the robots.

These voice commands can be quite useful if you’ve got your hands full and don’t want to pick up your phone.

While older generation robot vacuums navigate by randomly roaming around your house, the S7 and j7 both clean in straight lines like a human would. This way of cleaning is much more efficient.

Additionally, the Roborock S7 has no-go zones, no-mop zones, and invisible walls. You can draw these zones on the maps saved on the app so you can prevent the robot vacuum from cleaning the corresponding areas.

The j7 does not have the invisible walls function, but it does have keep-out zones, which are similar to no-go zones.

You’ll also be able to use the selective cleaning with both models, which allows you to direct your robot vacuum to clean a single room or small area without having to start an entire cleaning session.

Being able to clean just the areas you want cleaned is quite the useful feature.

What is the difference between the Roborock S7 and S7+?

The Roborock S7 does not empty itself, it comes with just a charging dock. The S7+ is the base S7 robot plus the Roborock Auto-Empty Dock. Not only can the Auto-Empty Dock charge the S7, but it can also empty the vacuum’s dustbin automatically after each cleaning session.

Does the Roborock S7 detect poop?

No. The S7 does not detect smaller objects like pet waste. However, other Roborock robot vacuum models like the S6 MaxV, S7 MaxV, and the S7 MaxV Ultra can recognize and avoid pet waste.

How often do you empty the Roborock S7?

Is the iRobot j7 good for pet hair?

Yes. The j7 has two main rubber brushes that don’t have bristles, which prevents hair and fur from getting all tangled up. You’ll thus be able to easily remove the hair from the brushes.

Does the Roomba j7 work without wifi?

Yes, the Roomba j7 will still be able to work without wifi. You can manually turn it on to start a cleaning session. However, you’ll need wifi to be able to use the app as well as voice commands.

The Roborock S7 is the way to go if you are looking for a robot vacuum that also mops. Not only that, but the mop on the S7 is top of the line. It doesn’t just drag across the floor, but instead vibrates 3,000 times a minute to give your floor a deeper clean.

If you have pets or don’t need mopping, the Roomba j7 is probably the one for you. It has reliable obstacle recognition and avoidance, so you don’t need to worry about pet waste becoming a problem. The j7 also has two main rubber brushes instead of just one, which means a deeper clean on carpet.

Which one do you prefer? Share in the comments section below.