In a nutshell, what are the differences between the Roborock S7 Plus and the S7 MaxV Ultra?

Difference 1: The Roborock S7 MaxV Ultra is equipped with dual front cameras, while the S7 Plus is not. 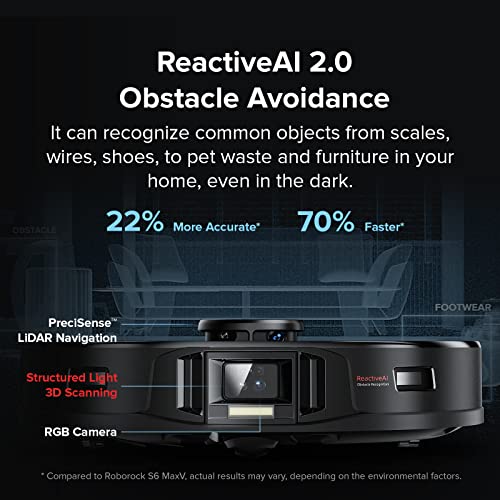 With its dual front cameras, the S7 MaxV Ultra is able to recognize furniture and various objects on the floor.

The cameras also come with an additional light that allows them to “see” in dark rooms, as well as structured light scanning that helps with object recognition.

Once the S7 MaxV Ultra recognizes obstacles on the floor, it will then adjust its route to avoid them.

If you have pets, the S7 MaxV Ultra is the better choice. It’s also suitable for busy people who might not have time to pick up clutter on the floor but would still like to have their floors vacuumed and mopped. Additionally, it’s also the better choice if you’d like to be able to check in on your home whenever you’re away.

Difference 2: The Roborock S7 Plus and S7 MaxV Ultra come with different types of docking stations.

The S7 Plus comes with the Roborock Auto-Empty Dock.

After every cleaning session, the S7 Plus will return to the Auto-Empty Dock and automatically empty the contents of its dustbin into the dock’s bin.

This bin can hold weeks’ worth of dust, dirt, and debris, and you’ll only have to empty it around once every two months.

Currently the brand’s most advanced dock, it has a variety of functionalities. Thus, the S7 MaxV Ultra can mop a larger floor area because if it runs out of water in its tank, it can return to its dock for a refill.

Additionally, the Empty Wash Fill Dock can also clean the S7 MaxV Ultra’s mop during and after a cleaning session.

The dock is also self-cleaning, so it can drain the dirty mop water into the dirty water tank. This can make maintenance easier because you won’t have to clean the robot vacuum yourself.

If you want a robot vacuum with a docking station that can empty the vacuum’s dustbin, then the S7 Plus is a great choice.

However, if you want a robot vacuum with a docking station that can refill your vacuum’s water tank, clean its mop, and empty its dustbin, the S7 MaxV Ultra is the way to go.

Difference 3: The S7 MaxV Ultra can provide 2D and 3D maps, while the S7 Plus can only provide 2D maps. Both the S7 Plus and the S7 MaxV Ultra can scan your home and create maps of each floor level.

With the multi-level mapping feature, they can save up to four maps. You’ll be able to use these maps to check on the vacuums’ cleaning routes, set no-mop zones and no-go zones, and draw invisible walls.

The S7 MaxV Ultra’s 3D maps can show you the layout of the furniture in your home, and it can also give you a different perspective of the robot vacuum’s cleaning routes.

The S7 Plus’s 2D maps will also be able to show you the robot vacuum’s cleaning routes, but only from a bird’s eye view.

Aside from giving a different perspective of your vacuum’s cleaning routes, the 3D maps aren’t that much different from their 2D counterparts. Thus, in this aspect, there’s not much of a difference between the two models.

Difference 4: The S7 Plus is better for people with allergies than the S7 MaxV Ultra.

The S7 Plus comes with a multi-layer filtration system that can capture particles as small as 0.3 microns. It also comes with a dust bag that automatically seals itself when you pull it out. You thus won’t have to be exposed to any dust or other allergens if you have to empty the dustbin yourself.

Meanwhile, the S7 MaxV Ultra doesn’t have this same multi-layer filtration system. Its docking station also allows it to automatically empty its dustbin, but it doesn’t have the self-sealing dust bag that comes with the S7 Plus.

If you have allergies or you’re prone to allergic reactions to dust and other particles, the S7 Plus is more suitable for you. However, if you don’t mind a robot vacuum that doesn’t have a multi-layer filtration system, then the S7 MaxV is also a great choice.

Difference 5: The S7 MaxV Ultra can clean a larger floor area than the S7 Plus.

Because the S7 MaxV Ultra can return to its docking station and refill its water tank, it can mop a larger floor area compared to the S7 Plus.

However, both models have the auto top-up feature, which enables them to automatically return to their docking station to recharge when their battery is low.

Thus, if you’re willing to wait for your robot vacuum to recharge before finishing its cleaning session, then the maximum amount of space it can clean on one charge won’t matter much. You can choose either the S7 Plus or the S7 MaxV Ultra.

On the other hand, if you’d prefer to have a robot vacuum that can clean a larger area without having to recharge, then the S7 MaxV Ultra is the better choice.

Similarities between the Roborock S7 Plus and the S7 MaxV Ultra

Similarity 1: Both models have VibraRise technology.

With Roborock’s VibraRise technology, these robot vacuums are able to scrub your floors 3,000 times a minute. They won’t just wipe your floors with a wet mop cloth, and they’ll be able to remove mud stains, stubborn dirt, and dried stains that other robot vacuums may find difficult to handle.

Additionally, both models can also lift up their mop attachments when they detect carpeted floors. Because the mop attachment can be lifted, the wet mop cloth won’t have to be dragged across your carpets. This way, your carpets won’t get wet.

Similarity 2: Both models can be controlled in the same way. You can use the Roborock app to easily set no-mop zones, no-go zones, and the like for both models. The app will also allow you to access saved maps, as well as allow you to adjust the suction power according to your preferences.

Additionally, you can also use the app to schedule different rooms for separate cleaning sessions. For example, you can schedule your robot vacuum to clean the living room in the morning and the kitchen in the evening after dinner.

Both models are also compatible with Google Home and Alexa, so you’ll be able to set up voice commands. If you’re busy and you can’t manually input certain commands in the app, you can simply tell your robot vacuum what you want it to do.

Both models also come with buttons that you can use to set certain functions, though you won’t be able to access all of the robot vacuums’ features through the buttons.

Similarity 3: Both models have a similar runtime.

The S7 Plus and the S7 MaxV Ultra both have a maximum runtime of 3 hours. However, this can depend on the settings you use. For example, if you use higher suction power settings, the runtime of either vacuum will likely be shorter.

Even on higher settings, however, these robot vacuums can last for an hour or a bit more. It can clean a significant area in that time, and may even be able to clean your whole house depending on its floor area.

Similarity 4: Both models can automatically boost their suction power when they detect carpet. These robot vacuums will increase their suction power to the maximum level to be able to remove as much dirt from carpeted floors as possible. Because this is automatic, you won’t have to increase the suction power yourself.

However, if you want your vacuum to clean your floors more deeply, then you can keep it on the maximum suction power setting until it’s done cleaning.

Does the Roborock S7 Plus have obstacle avoidance?

No, the S7 Plus does not have object avoidance capabilities and thus works best for uncluttered floors and people who don’t have pets. However, it has bumpers that can guide it away from large objects, such as furniture.

Does the Roborock S7 Plus mop and vacuum at the same time?

Yes. As long as you attach the water tank with the mop module, the S7 Plus will be able to vacuum as well as mop your floors. You can also set no-mop zones in certain areas of your house that you want to be vacuumed but not mopped.

Can the S7 MaxV Ultra work with different docks for different floors?

Yes, you can purchase extra docks for different floors of your house. This way, the S7 MaxV Ultra will be able to recharge, refill its water tank, clean its mop, and empty its dustbin no matter which floor level it’s on. All you’ll need to do is carry the robot vacuum to the floor level you want it to clean.

Can you use a cleaning solution with the Roborock S7 MaxV Ultra?

Roborock recommends only using its own Multi-surface Floor Cleaning Solution. Using other cleaning solutions, soaps, or detergents isn’t recommended because they might damage certain parts of your robot vacuum.

Will the Roborock S7 MaxV Ultra work without an internet connection?

Yes. However, you won’t be able to access all of its features. You’ll need wifi to be able to use the app, which can enable you to set no-go and no-mop zones, schedule cleaning sessions, toggle suction power settings, and more. You’ll also need wifi for voice commands.

You can still use the buttons on the S7 MaxV Ultra to turn the robot vacuum on, but you won’t be able to use many of its features.

Thus, if you want a robot vacuum that comes with a newer dock with more features and capabilities, then the S7 MaxV Ultra and the Empty Wash Fill Dock are great choices.

Additionally, the S7 MaxV Ultra has dual front cameras and structured light scanning capabilities, allowing it to recognize and avoid obstacles. It’s best for households with pets, because it can effectively avoid running into any pet waste. The cameras also allow you to make video calls through the robot vacuum.

If you have pets at home and you want a dock that can do much of the maintenance on your robot vacuum for you, then you should choose the S7 MaxV Ultra.

If you don’t mind doing some maintenance on your robot vacuum yourself, then the S7 Plus is also a good choice. Because it has a multi-layer filtration system, it’s a great choice for people who have allergies. It can also work well for people who don’t have pets and don’t need robot vacuums with front cameras.