In a nutshell, what are the differences between the Roborock S5 Max and the S7?

The Roborock S7 has VibraRise technology and is compatible with Roborock’s Auto-Empty Dock, two features not found on the S5 Max.

On the other hand, the Roborock S5 Max can cover a larger floor area and has a spring-loaded mop attachment that keeps consistent pressure on the floor as it mops.

Difference 1: The Roborock S7’s mop attachment can scrub floors instead of just wiping them. With the Roborock S7’s VibraRise feature, its mop scrubs your floor 3,000 times per minute. It won’t just be dragging a wet mop along the floor; it will be able to remove tough spills and even dried stains, which robot vacuums without VibraRise will have difficulty with.

Because of this technology, the S7 is great for deep cleaning and tougher stains.

Meanwhile, the S5 Max has a spring-loaded mop that allows it to mop floors with consistent pressure even as the water tank gets lighter. However, it won’t be able to scrub the floors the same way that the S7 can. While it will be able to wipe up spills, it will have a tougher time removing dried stains.

The S5 Max is good for maintaining the cleanliness of floors and getting rid of minor spills. However, the S7’s VibraRise technology means that its mopping function is more effective than the S5 Max’s.

Difference 2: The S7 has a mop-lifting feature that keeps carpets from getting wet, while the S5 Max does not.

When the S7 detects that it’s about to go on rugs or carpeted areas, it will automatically retract its mopping attachment. As a result, the wet mop won’t come into contact with the carpet, thus preventing the carpet from getting damp. This is also part of the VibraRise technology.

Meanwhile, the S5 Max does not have this feature. You can assign no-mop or no-go zones to prevent the robot vacuum from dragging a wet mop on carpeted floors. You can also remove the water tank if you don’t want the wet mop cloth to dampen carpets.

In this regard, the S7 is more convenient to use, especially if you have low-pile carpet in your home. The S5 Max is better for homes with few to no rugs or carpeted areas, unless you’re willing to make the effort to set up various no-mop zones or remove the mop attachment.

The S7 is the clear winner here.

Difference 3: The S7 is compatible with the Roborock Auto-Empty Dock, while the S5 Max is not. The Roborock Auto-Empty Dock is sold separately and is only compatible with the newer Roborock robot vacuum models, including the S7. Once the S7 is done cleaning, it will automatically go back to the dock and empty its dustbin into the dock’s dustbin.

The S5 Max, however, is not compatible with the Auto-Empty Rock. You’ll thus have to empty the S5 Max’s dustbin yourself.

The downside to the Auto-Empty Dock is that it has to be bought separately and is thus an added expense. However, it may be worth it for the added convenience. It’s best for busy households that need to be able to do as little maintenance as possible to keep a clean home.

If you’d rather not have to regularly empty your robot vacuum’s dustbin, then the S7 is the better choice if you buy the Auto-Empty Dock. However, if you don’t mind taking an extra few minutes to empty the dustbin yourself after every cleaning session, then the S5 Max can be a good choice.

Though the S5 Max doesn’t have some of the capabilities and features that the S7 has, it does have a leg up in the endurance department.

If you need a robot vacuum that can cover a larger space in one go, then the S5 Max is the better choice over the S7.

However, since both models have the auto top-off feature, they’ll be able to automatically recharge if they run out of battery in the middle of a cleaning session.

Because of this, the square footage that these robot vacuums cover does not matter as much.

Similarities between the Roborock S5 Max and the S7

Similarity 1: Both models have LiDAR navigation. 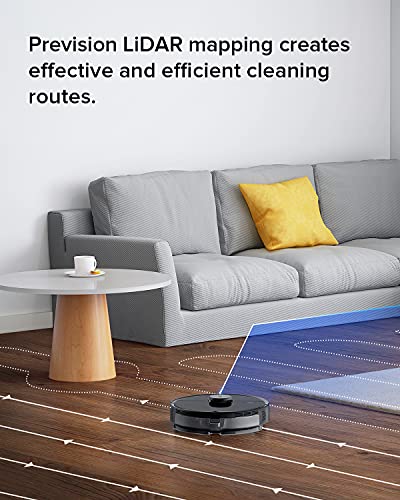 The S7 and the S5 Max both have multi-level mapping capabilities, which means that they can create and save maps of up to four different floor levels. With LiDAR navigation, these robot vacuums will be able to detect the layout of the rooms in your house, as well as the layout of various furniture and obstacles in each room.

Because the robot vacuums can save these maps, they won’t need to re-scan the rooms every time they go to a different floor level. You’ll also be able to access all of the saved maps on the Roborock app.

Additionally, these robot vacuums can adapt their routes to be able to efficiently vacuum and mop the different rooms of your home. This also ensures thorough cleaning so that no dirt or debris is left behind.

Similarity 2: Both models have features that allow you to guide their routes.

The S7 and the S5 Max will allow you to set no-go zones and no-mop zones. You’ll be able to draw these zones anywhere you choose on the maps saved on the Roborock app. You can also select specific rooms for cleaning without having the vacuums clean all the other rooms in the house. For example, if you’ve tracked dirt into your foyer or mudroom, you can quickly program both vacuums to clean only those rooms.

Similarity 3: Both models have the carpet boost feature.

Once the S7 and S5 Max detect that they’re on carpeted floors or rugs, they’ll automatically increase their suction power to the highest level. This will make it easier for them to dislodge dirt and debris from the fibers of the carpet.

With this feature, the vacuums will be able to adequately clean carpets without having to make several passes. You also won’t have to keep an eye on the vacuums to see if they’re on carpeted floors and then manually increase the suction power yourself. Just make sure that the carpet boost feature is turned on, and the vacuums will do the rest for you.

Both models will also automatically decrease suction power once they’re back on bare floors.

Similarity 4: Both models can be controlled in the same way.

You can turn on the S5 Max and the S7, as well as activate certain features, by using the buttons on the top surface of both vacuums. The Roborock app will also allow you to access the saved maps, toggle features, set schedules, select specific rooms for the vacuums to clean, increase or decrease the suction power, and more. You’ll likely be relying on the app to be able to control both vacuums more easily.

Both vacuums are also compatible with Alexa and Google Home. Once these vacuums have been linked to these platforms, you’ll be able to use voice commands. This can be especially useful if you’ve got your hands full and there’s a spill that you’d like your vacuum to mop up.

Similarity 5: Both vacuums will automatically top-up when low on battery.

On a single charge, the S5 Max and the S7 can both run for up to 3 hours on the lowest settings. However, this can vary depending on the features you choose as well as the level of suction power employed by the vacuums.

Additionally, both robot vacuums have the auto top-up feature. This means that they’ll automatically return to their docking station to recharge if they run out of battery before a cleaning session is done. Once they’ve re-charged, they’ll go right back to where they left off and finish the rest of the session.

What is the difference between the Roborock S5 and S7?

The S7 is a newer model compared to the S5 and thus has more capabilities and features. For example, it has the VibraRise feature and it’s compatible with the Robroock Auto-Empty Dock. However, the S5 Max has a spring-loaded mop attachment, and it can also cover a larger floor area than the S7.

Is the Roborock S5 Max loud?

No. The S5 doesn’t produce as much noise as upright vacuums and isn’t too disruptive. However, it can get louder if there’s something that’s gotten stuck in the fan or if the fan is dirty. Typically, the S5 is not so loud that you can’t have a normal conversation while it runs.

Does the Roborock S5 Max vacuum and mop at the same time? Yes, the S5 mops floors as it vacuums them, ensuring that your floors won’t need multiple passes to be completely cleaned. If you’d like to turn off the mopping feature, you can set no-mop zones. You can also remove the mop attachment if you want the S5 to only vacuum your floors.

No, though the Roborock S6 MaxV and the S7 MaxV both have cameras.

The Roborock S5 Max and the S7 have many of the same features and functions, so choosing one or the other will depend on your specific needs and preferences. The Roborock S7 offers more convenience because it has a more advanced mop that will clean up messes and dried-on stains better than the S5 can.

However, if you’re looking for something that is less expensive to help you maintain the cleanliness of your home and you don’t have carpeted areas, the S5 is also a good choice.