In a nutshell, what are the differences between the Roborock S7 and the S7 MaxV?

For a closer look at each of these two robot vacuums, continue reading below.

Difference 1: The Roborock S7 MaxV has dual front cameras for obstacle avoidance, the S7 does not. The “MaxV” in the name of the Roborock S7 MaxV refers to its artificial vision system. It is equipped with dual front-facing cameras to map and avoid obstacles in its path. This feature is great if you have pets. We know Fido is well trained, but no one is perfect 100% of the time. Should Fido ever accidentally leave a mess on the floor inside the house, the S7 MaxV would be able to see, recognize, and avoid the mess.

The S7 does not have cameras and therefore lacks this feature. It is able to detect larger objects like chairs, tables, and cabinets with its LIDAR system. But due to the way LIDAR works and the fact that it sits on top of the machine, it won’t be able to see small objects to the ground, like pet waste and stray charging cables.

The S7 MaxV is definitely the winner here, especially for those with pets.

Difference 2: The S7 MaxV allows you to make video calls, while the S7 does not. 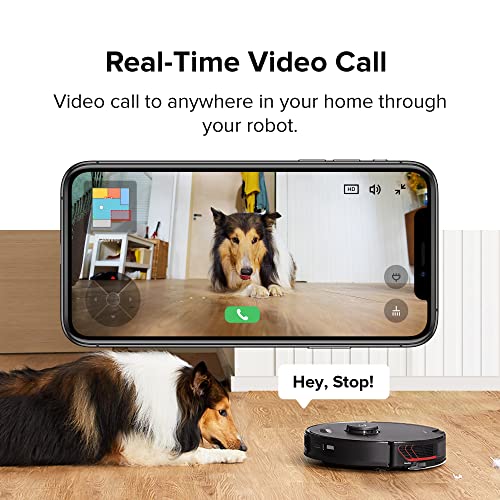 If you’ve ever dreamed of video conferencing your family members via a…..robot vacuum, then the S7 MaxV is for you.

For the rest of us, this feature probably won’t be utilized too often.

Nevertheless, the S7 MaxV’s remote viewing feature lets you see and talk to whoever is home when you are away.

You can access the camera through the Roborock app, so you’ll be able to look in on your pets and see what they’re up to.

Because the S7 doesn’t have cameras, it won’t have this ability.

Difference 3: Only the S7 MaxV can provide you with a 3D map of your home.

Both the S7 and S7 MaxV can scan your home and generate a map of each floor level. However, only the S7 MaxV is able to render a 3D map of your home. These 3D maps will also be able to show you the layout of your furniture.

While cool to look at, it’s important to note that these 3D maps don’t differ much from 2D maps in terms of functionality.

Both types of maps will allow you to draw no-go zones, no-mop zones, and invisible walls, among other things.

With the 3D maps, you’ll be able to see how the robot vacuum will be able to clean your home from a different perspective. However, you can’t do much more than that.

While cool to have, the 3D mapping feature is not a must-have.

Difference 4: The S7 MaxV can clean a larger floor space with one charge.

The S7 MaxV is able to clean up to 2,690 square feet of floor space on a full charge.

However, this varies depending on the type of floor you have and the suction power used while cleaning.

Meanwhile, the S7 will be able to clean up to 2,150 square feet on a full charge. Like the S7 MaxV, this depends on the settings you use. If you use higher settings, the vacuum will likely only be able to cover a smaller area.

One thing to note is that both machines have “auto top-off”, which means they will recharge mid-clean if they sense that they don’t have enough power to finish cleaning your entire floor.

This makes the maximum area of coverage not as big a deal.

If you want a robot vacuum that can clean a larger space with one charge, then the S7 MaxV is the better choice. It will be more likely to be able to clean a large home without having to recharge.

Similarities between the Roborock S7 and the S7 MaxV

Similarity 1: Both the S7 and the S7 MaxV have VibraRise technology.

Both robot vacuums are equipped with a “sonic” mop.

The mopping module vibrates back and forth 3,000 times per minute, mimicking a “scrubbing” action.

This allows them to remove mud, dried stains, and other kinds of tough messes that other robot vacuums might not be able to handle.

The VibraRise system also enables the S7 and the S7 MaxV to lift their mop modules when they detect carpet. By retracting the mop, the mopping pad won’t drag against the carpet.

However, the mop modules are only able to rise high enough to avoid low-pile carpets.

If you have medium- and high-pile carpets, they might still get dampened by the mopping pad. Both the S7 and the S7 MaxV have electronic water tanks, which enables the “no-mop zone” feature.

It means that they are able to automatically cut the flow of water to the mop cloth when the robots enter a carpeted area or an area you have designated as “no-mop”.

This combined with the mop lifting feature mentioned above means your carpets won’t get wet.

Another benefit of the advanced water tank is the ability to control the amount of water that flows out more precisely.

The controls are accessed via the Roborock app.

Similarity 3: Both models have the auto top-up feature.

This feature enables the S7 and S7 maxv to automatically return to their docking stations to recharge if they sense that they are running low on battery mid-clean.

Once they has recharged sufficiently, they will resume cleaning until your entire floor is cleaned.

Similarity 4: Both models use LiDAR to navigate. With LiDAR navigation, the S7 and the S7 MaxV are both able to map your home accurately and find their way around your house.

Both machines are able to remember maps of each floor of your home. They can save up to four different maps, so they won’t need to re-scan each floor every time you start a new cleaning session.

With this multi-floor mapping feature, you’ll be able to program no-go zones, no-mop zones, invisible walls, and the like for rooms on different levels of your home.

Similarity 5: Both models have the carpet boost feature.

Once the S7 and S7 MaxV detect carpets or rugs, they’ll automatically increase their suction power to the maximum level.

This enables the robot vacuums to clean carpets more deeply. With maximum suction power, they’ll be able to dislodge deep-seated dirt, which might not be possible at lower power settings.

Thie feature means you won’t have to manually increase the suction power if you have a mix of hard surfaces and carpet. Simply make sure that the carpet boost feature is turned on, and these vacuums will take care of the rest for you.

Similarity 6: Both models are compatible with the Auto-Empty Dock. The Roborock Auto-Empty Dock is a docking station with an onboard waste bin.

If you want an extra layer of convenience, the docks can be a good idea.

Compatible robot vacuums will return to this dock once they’ve completed their cleaning sessions. They’ll then empty their dustbins into the dock’s receptacle, which can hold several weeks’ worth of dust and dirt.

Can the Roborock S7 work without wifi?

Yes, the S7 will still be able to perform its essential functions even without wifi. You’ll be able to use the buttons on the robot vacuum to turn it on and program certain functions. However, you won’t be able to access some of the more advanced functions available on the app, such as suction power strength control, scheduled cleaning, and the like.

Compared to many other vacuums, the S7 isn’t very loud. It can be as loud as a normal conversation, but it’s not deafening or irritating. It’s also unlikely to bother pets much, though they may react to the noise at first.

What does Roborock’s sonic mopping mean?

Roborock vacuums with sonic mopping will vibrate the mopping pad at 3,000 times per minute instead of just wiping a wet mop cloth on them. Sonic mopping thus enables robot vacuums to remove tougher stains, mud, dirt, and more.

No, it does not. Only Roborock vacuums with “MaxV” in their names are equipped with optical cameras for obstacle detection.

Does the Roborock S7 MaxV work with cleaning solutions?

The recommended cleaning product to use with the S7 MaxV is the Roborock Floor Cleaning Solution for All Roborock Robot Mops.

Can the Roborock S7 MaxV recognize objects on the floor at night time?

Yes. Because it has structured 3D scanning, the S7 MaxV can scan and recognize objects even in the dark. Thus, if you want to run this robot vacuum at night, you’ll be able to do so without worrying about any clutter lying around on the floor.

While these robot vacuums have a lot of similarities, only the Roborock S7 MaxV has onboard cameras and obstacle avoidance, both of which are not found on the S7.

You’ll also be able to make video calls through the Roborock app with the S7 MaxV, if that is an important feature for you..

If you have pets and run the vacuum when you’re not home, the S7 MaxV is probably the way to go. With its obstacle avoidance feature, you won’t have to worry about any surprise pet waste turning a robot cleaning session into a disaster. It will also avoid small objects left on the ground like toys and charging cables.

In either case, both vacuums will be able to vacuum and mop your floors effectively.