In a nutshell, what are the differences between the Roborock S5 and the S7?

The Roborock S7 has sonic mopping and the ability to retract the mop on carpet. These features allow the S7 to mop more efficiently and are not present in the S5. The S7 is compatible with the Roborock Auto-Empty Dock, which can make cleaning and maintenance easier. The Roborock S5 does not have a compatible auto-emptying dock.

Difference 1: The S7 has VibraRise technology, while the S5 does not.

Because of Roborock’s VibraRise feature, the S7 automatically lifts its mopping attachment when it detects carpeted floors. It will thus be able to vacuum the carpet while preventing it from getting wet.

Additionally, the S7 has an electronic water tank, so it will automatically stop the flow of water into the mopping attachment once it’s on a carpet. 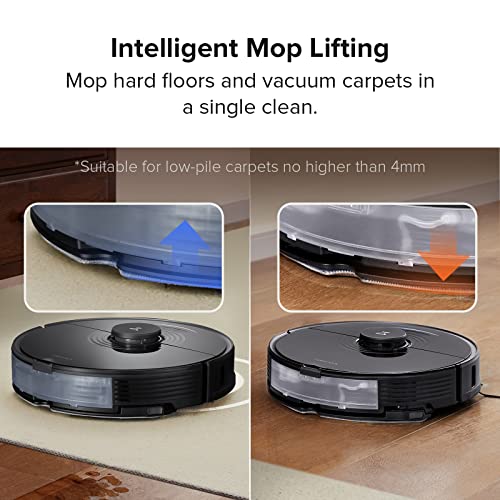 Once the S7 detects that it’s back on bare floors, the mopping attachment will snap back into place and the robot will resume vacuuming and mopping.

The S5 does not have the VibraRise technology, and you may need to remove the mopping attachment entirely when you want the robot to vacuum carpeted floors or rugs.

The S7 takes the cake in this aspect because of its more advanced technology.

Difference 2: The S7 is better at removing tough stains. The S7 has sonic mopping technology that allows its mopping attachment to scrub your floors up to 3,000 times a minute. While the S7 won’t be able to deep-clean your floor, it will be able to remove stubborn dirt and dried stains more efficiently.

The S5 also has a mopping function, but it’s not as efficient. It will be able to wipe up spills and remove some dirt, but it won’t be able to mop as thoroughly as the S7. It’s best used for light cleaning and minor spills and stains, and you’ll likely have to manually mop or scrub your floors yourself to remove tougher spills or dried stains.

Still, the clear winner here is the Roborock S7 because it’s better at removing tougher stains and spills.

Difference 3: The S7 is simpler to use than the S5.

The S5 doesn’t automatically detect and avoid carpets when it’s on Mop Mode. Instead, you will need to draw invisible walls on the map to prevent the vacuum from entering certain areas, or you can put down magnetic barrier tape across the entrances to carpeted rooms.

If you have a lot of carpeted areas in your home, the S7 can make things a lot easier for you. However, if you don’t have any carpeted rooms or rugs, then the S5 can help maintain the cleanliness of your floors.

The S7 has better mopping capabilities and is less complicated to set up compared to the S5.

Difference 4: The S7 is compatible with the Roborock Auto-Empty Dock.

You can buy the Auto-Empty Dock separately if you don’t want to have to regularly empty the S7’s dustbin.

The S7 will automatically return to the Auto-Empty Dock after cleaning and will then deposit the contents of its dustbin. The dock can hold up to around 8 days’ worth of dust, so you’ll only have to empty it every week or so.

The S5, however, is not compatible with the Auto-Empty Dock. You’ll have to empty the dustbin yourself, ideally after every cleaning session.

With its features and compatibility with the Auto-Empty Dock, the S7 is best for those who lead busy lives. You can enjoy a home that gets cleaned every day while only having to empty the dock’s dustbin once a week.

However, if you have more time on your hands and you don’t mind manually emptying your robot vacuum’s dustbin regularly, then the S5 should suffice.

In terms of providing convenience to its users, the S7 is the clear winner here.

Difference 5: The Roborock S7 is supported by the Roborock app, while the S5 is not.

The S5 is a much older model than the S7, and it’s compatible with the Xiaomi Mi Home app instead of the Roborock app. If you have other Xiaomi devices, then you’ll only have to use one app to use those devices as well as the S7.

While the Mi Home app is supposed to be able to support Alexa and Google Assistant, many users have had trouble linking the two to the app. The Roborock app, however, makes it easy to connect to both Alexa and Google Home.

If you’re more partial to the Roborock app and you’d like to be able to easily integrate Alexa and Google Home, then the S7 is the better choice. However, if you already have other Xiaomi devices, or you don’t mind using the Mi Home app, then the S5 should do fine.

Similarities between the Roborock S5 and the S7

Similarity 1: Both models have the carpet boost feature.

The S7 can automatically detect carpets and rugs and will also automatically increase the suction power to ensure that it sucks up as much dust and dirt as possible.

You’ll have to turn on the S5’s Carpet Mode so it can detect carpets and rugs, but it will also automatically increase suction power once it detects carpets as well.

This way, these vacuums will be able to clean carpets more efficiently without having to make several passes. Additionally, both models can work with low-, medium-, and high-pile carpets, though the S5 tends to suck up more carpet fibers than the S7.

Both the S7 and the S5 will then reduce their suction power when they’re back on a hard surface.

Similarity 2: Both models can save maps of your home.

The S5 and S7 can scan your home and generate maps that show the layout of the rooms. Both will be able to keep a record of these maps so they won’t have to take the time to scan the house every time they’re used.

These robot vacuums will scan your home the first time you activate them. They’ll then be able to generate the maps that you’ll use to set no-go zones, invisible walls and virtual barriers, and the like.

On the Mi Home app, you’ll have to enable the map saving mode in the vacuum settings to make sure that the S5 saves a map of your home.

Similarity 3: Both models can be controlled in similar ways. The S5 and S7 have buttons on their top surface, which you can use to turn them on and toggle various features and functionalities.

You’ll also be able to control both using an app, though the S5 is compatible with the Mi Home app and the S7 can be controlled with the Roborock app. You can use both apps to access the maps of your home, set cleaning schedules, prompt the vacuums to return to their docking stations, and more.

Technically, both models should also be compatible with voice control. It’s easy to link the Roborock app to Alexa or Google Home, but doing so can be more complicated with the Mi Home app. However, it’s still possible. If you’re able to successfully link these virtual assistants to the Mi Home app, you’ll be able to give voice commands to the S5.

What is the difference between the Roborock S5 and S7?

Is the Roborock S5 good?

Even though the Roborock S5 is an older robot vacuum, it can still perform well and can reliably help you keep your home clean. Additionally, it’s on the cheaper side but still has features and capabilities that you won’t find in many other vacuums in the same price range. However, if you’re looking for more advanced robot vacuums, then you might want to look for newer models.

Does the Roborock S5 mop carpet?

No, but you’ll have to do certain things to make sure that it won’t mop your carpeted surfaces. You can use barrier tape or the invisible walls feature to prevent the robot vacuum from entering areas with carpeting. Another thing you can do is to remove the water tank and mopping attachment to prevent carpets from getting wet.

How many maps can Roborock S7 save? The Roborock S7 is newer and has more advanced technology, so it outperforms the S5 in many ways. However, the S5 is great for those who are looking for a more affordable robot vacuum that can still clean well and has more capabilities than others in its price range.

If you want a more updated robot vacuum with the latest technologies, the S7 is just one of the many possible choices that Roborock offers. Not only is it easy to use and program, but it can also clean your floors with minimal input from you. It’s also the better choice if you have many carpeted areas in your home.

The Roborock S5, in contrast, needs more interventions than the S7. However, it still has powerful suction and allows app control, which can make it easier for you to toggle between the different functionalities. If you’re looking for something more affordable, the S5 is a great choice.