In a nutshell, what are the differences between the Roborock S6 MaxV and the S7 MaxV?

The Roborock S7 MaxV has a better mopping system that scrubs the floor and raises itself on rugs. It covers more ground and has stronger suction than the S6 MaxV.

Both models use LIDAR to navigate your home logically. Both are equipped with cameras and are capable of obstacle avoidance.

Difference 1: The S7 MaxV is equipped with the Vibrarise mopping system while the S6 MaxV is not.

The VibraRise system sets the S7 MaxV apart from the S6 MaxV and all the older Roborock robot vacuum series. The S7 MaxV’s mopping attachment vibrates 3,000 times a minute. This allows it to effectively scrub floors instead of just wiping them with a damp mopping cloth.

Additionally, the S7 MaxV automatically lifts its mop as soon as it detects that it’s on a carpeted surface. Thus, the S7 MaxV can vacuum carpets without the mop attachment getting them wet.

Difference 2: The S7 MaxV is capable of 3D mapping.

Both the S6 MaxV and the S7 MaxV have sensors that help them create maps of your home, which you can access on the Roborock app. However, only the S7 MaxV is capable of creating 3D maps.

With a 3D map, you’ll be able to see a rough layout of where your furniture and other objects in your home are. You can also use the 3D map to set routes, no-go zones, invisible walls, and the like. You’ll be able to see how the S7 MaxV determines its routes to adjust to the placement of objects in these rooms.

However, what the 3D map does is simply provide you with another perspective or view into how the S7 MaxV will clean your home. Other than this, it doesn’t have any other capabilities that the 2D map doesn’t have.

Thus, in this regard, the S7 MaxV has just another slight edge over the S6 MaxV. The 3D map is evidence of the S7 MaxV’s advanced technology, but it doesn’t really add more functionalities.

Difference 3: The S7 MaxV has stronger suction than the S6 MaxV.

With over twice as much suction power as the S6 MaxV, the S7 MaxV can deep-clean your home every time it’s activated. At its highest suction level, it can remove dirt from thick carpets and the seams of hardwood floors. If your floors haven’t been vacuumed in a while or there’s a pretty big mess that needs to be cleaned up, the S7 MaxV can clean efficiently.

The S6 MaxV’s suction power is still quite good and is stronger than the suction power of many other robot vacuums. However, it won’t go beyond 2,500 Pa, so it might not be as efficient as the S7 MaxV when it comes to bigger or more difficult messes.

The clear winner here is the S7 MaxV, which gives you more options when it comes to suction power.

Difference 4: The S7 MaxV is compatible with the Roborock Auto-Empty Dock, while the S6 MaxV is not.

The Auto-Empty Dock needs to be purchased separately, but if you buy one for your S7 MaxV, it can make maintenance easier. Once the S7 MaxV is done cleaning, it will automatically go back to the Auto-Empty Dock and empty its dustbin. This docking station can accommodate a plastic bag that can carry several days’ worth of dust and dirt.

The S6 MaxV doesn’t have this feature, and you’ll have to empty its dustbin yourself at the end of each cleaning session. Thus, the S7 MaxV can provide more convenience than the S6 MaxV.

Note that Roborock sells a version of the S7 MaxV that comes with the auto-empty dock, it is named the S7 MaxV Plus.

Difference 5: The S7 MaxV allows you to speak to your pets and family members through the app.

Though both the S6 MaxV and the S7 MaxV both have cameras, only the S7 MaxV will allow you to have video calls with your pets and anyone who’s at home. Using the Roborock app, you can look into your home through the S7 MaxV’s cameras to see what’s going on in real-time. You can also use the app to “call” the vacuum, and you’ll be able to see and have conversations with your family whenever you’re away from home.

Thus, if you want a vacuum that enables video calls, the S7 MaxV is the choice for you. However, if you think that you don’t need this feature, then the S6 MaxV will serve you just as well.

Difference 6: The Roborock S7 MaxV can clean a larger area than the S6 MaxV.

Both of these models can work for large homes, though the S7 MaxV is the more efficient choice if you have more ground for a robot vacuum to cover. Even if your home doesn’t have 5+ bedrooms, the S7 MaxV can still be useful if you live with multiple people or you have pets to pick up after.

Of course, the same can be said for the S6 MaxV. It can also cover a considerable amount of floor space, more than other robot vacuums can cover. Thus, the S7 MaxV has only a slight edge over the S6 MaxV in this regard.

Similarities between the Roborock S6 MaxV and the S7 MaxV

Similarity 1: Both models can vacuum and mop in each pass. The Roborock S6 MaxV and the S7 MaxV both come with electronic water tanks that you can control remotely. At 300 ml, the S7 MaxV’s water tank is just slightly bigger than the S6 MaxV’s 297 ml tank. However, this is such a small difference that you’re unlikely to notice it at all.

Similarity 2: Both models have LiDAR navigation.

The S7 MaxV and S6 MaxV are both equipped with LiDAR capabilities that allow them to generate maps of your home. LiDAR also helps these vacuums find the best and most efficient route when cleaning different rooms.

With the help of this technology, you’ll be able to set up no-mop zones, no-go zones, and invisible walls to help guide these robot vacuums in their cleaning routes.

Additionally, LiDAR enables these vacuums to create maps of up to four floor levels in your home. Once these vacuums have created these maps, they won’t have to re-scan the different levels of your home each time they need to be cleaned.

Similarity 3: Both models can be controlled and programmed in multiple ways. 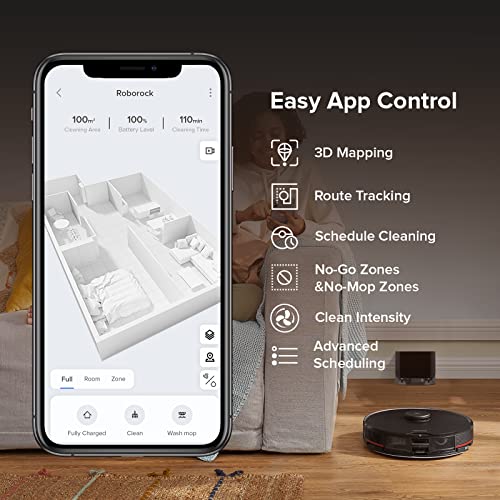 You can use the Roborock app, voice commands, and buttons to program the S6 MaxV and the S7 MaxV.

The app will show you the maps of the different floor levels of your home, so you’ll be able to program different settings in different areas or rooms. For example, you can easily set up no-go zones or no-mop zones by using the app’s map function. You can also set schedules, control your robot vacuum’s suction power and water use, and more.

Because both of these models are compatible with Alexa, Siri, and Google Home, you’ll be able to give voice commands and program different settings. You can tell the vacuums to start or stop cleaning without having to lift a finger.

The top surface of the vacuums also has the buttons you’ll need to program certain settings.

Similarity 4: Both models have a similar runtime.

The S6 MaxV and the S7 MaxV have the same maximum runtime, which is 3 hours. Depending on the settings you want and the size of your home, 3 hours can be enough for a complete cleaning session.

The vacuums can run out of battery before they finish a cleaning session. If this happens, both models can automatically return to their docking stations to recharge. Once they’ve recharged, they’ll then go back to complete the rest of their cleaning sessions.

Similarity 5: Both models have object recognition and avoidance capabilities. Both the S6 MaxV and the S7 MaxV have dual front cameras, which set them apart from other robot vacuums. However, the S6 MaxV has one regular camera and one infrared camera. The S7 MaxV, meanwhile, has an RGB camera and a 3D structured light camera.

The S6 MaxV’s infrared camera in particular allows the robot vacuum to still be able to recognize and avoid objects in the dark.

The S7 MaxV cameras, meanwhile, are also used for object recognition and avoidance.

Both robot vacuums can recognize objects such as shoes, power cords, and other things that you’ll commonly find around the house. If you haven’t had the chance to clear up the clutter in your home, these vacuums will clean around those objects and avoid bumping into them.

What is the difference between the Roborock S6 MaxV and S7 MaxV?

The S7 MaxV has more than twice the suction power of the S6 MaxV, and it can also vacuum a larger floor area on a single charge. While both models have cameras, only the S7 MaxV allows you to have video calls with anyone who’s in your home while you’re away.

Does the Roborock S6 MaxV know not to mop carpeted floors? While the Roborock S6 MaxV doesn’t automatically detect carpeted surfaces, you can program no-mop zones to make sure that it won’t mop your carpets. Once the vacuum enters a no-mop zone, it will automatically stop the flow of water from its water tank.

Does the Roborock S7 MaxV have obstacle avoidance?

Yes. The S7 MaxV is equipped with LiDAR navigation and dual front cameras, all of which work together to enable effective obstacle avoidance. Once it detects obstacles in a room, it will automatically adjust its route to make sure that it doesn’t bump against any obstacles.

Is the Roborock S6 MaxV noisy?

Even at its highest suction settings, the S6 MaxV isn’t as loud as you might expect. It still emits noise, but it’s not loud enough to be disruptive. You’ll still be able to hold conversations, watch movies, and work without much issue while the vacuum cleans your home.

With its sonic vibration technology, the S7 MaxV’s mopping attachment vibrates 3,000 times a minute. This allows the vacuum to “scrub” the floor instead of just wiping it with a wet cloth, thus enabling it to remove tougher dirt and stains.

Additionally, the Roborock S6 MaxV provides you with a real-time video feed of your home. However, the S7 MaxV allows you to make video calls and have conversations with people at home while you’re away.

If you want a fully-featured robot vacuum with a lot of perks, the S6 MaxV can provide you with what you need. It’s also a great choice if you don’t need to make video calls through your vacuum cleaner.

However, if you want an upgrade from the already-great S6 MaxV, then the Roborock S7 MaxV is a great choice. It’s also better for those who want a multi-functional vacuum that can deep-clean floors and carpets.