In a nutshell, what are the differences between the Roborock s6 MaxV and the S6 Pure?

The Roborock S6 MaxV is equipped with dual front-facing cameras for obstacle avoidance, the S6 Pure is not. The S6 MaxV has the “no-mop zone” feature, the S6 Pure does not. Finally, the S6 Max has stronger suction and can cover more ground than the Roborock S6 Pure.

For a deeper look at the two robot vacuums, keep reading below.

There are some differences between the two, and I will explain exactly what those are below.

Difference 1: The s6 MaxV is equipped with dual cameras, the S6 Pure is not.

The “MaxV” in Roborock S6 MaxV refers to its camera vision system, it’s equipped with dual front-facing cameras for obstacle recognition and avoidance. 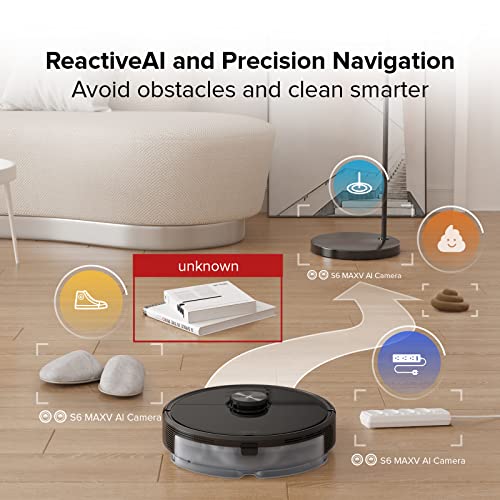 The S6 MaxV has ReactiveAI, the technology that allows it to identify and avoid obstacles in an area. These obstacles can include extension cords, shoes, common objects, and even pet waste.

One of those cameras on the S6 MaxV is infra-red, so the robot will also be able to see these obstacles in the dark without issue.

A bonus feature of the camera system is that you can turn on the camera while you’re away from home to check in on your pets or just to see if everything is alright at home.

Unfortunately, the S6 Pure doesn’t have any cameras. It is able to vacuum your floors in a logical manner, but it won’t be able to identify specific objects and avoid them the way that the S6 MaxV can.

The S6 MaxV is the winner here.

Difference 2: The S6 MaxV has stronger suction than the S6 Pure.

This doesn’t mean that the S6 Pure is ineffective, it is quite good at ridding your floors of dirt, hair, crumbs, and other kinds of messes. It works on both hard surfaces and low- to medium-pile carpets.

If you want a more thorough cleaning of your floors, or if perhaps there’s dirt that has been embedded deep in your carpet, the S6 MaxV is probably more reliable and efficient.

While the S6 Pure is no slouch, the S6 MaxV wins here for having stronger suction.

Difference 3: The S6 MaxV is able to cover more ground in one go.

Both of these models have a similar runtime and battery capacity, but the S6 MaxV is designed for larger spaces.

If you have a big house or apartment with multiple levels, the S6 MaxV is your best bet.

Usually, homes with around 2,000 or so square feet of floor space have three to four sizable bedrooms, walk-in closets, at least two bathrooms, a living room, a dining room, and a kitchen.

Thus, if you have a single-family home that needs regular cleaning, the S6 MaxV is the better choice.

However, if you live in an apartment or a one-bedroom home, the S6 MaxV might be overkill.

The S6 Pure will suffice for homes that are smaller than the typical single-family home. You can program the S6 MaxV to have no-mop zones, but you won’t be able to do the same with the S6 Pure.

No-mop zones are areas in your home where you don’t want your robot vacuum to mop the floors, such as carpeted rooms. You can set up no-mop zones in the app and the vacuum will make sure to avoid those areas when mopping.

Unfortunately, the S6 Pure doesn’t offer this feature. Its water tank is gravity-assisted and designed to let the water flow freely until the tank is empty. Thus, it won’t be able to turn the mop function on and off and back on again. The S6 MaxV, however, has an electric tank and is thus compatible with the no-mop zones feature.

You’ll still be able to use the no-go zone feature to keep the S6 Pure away from areas that you don’t want to be mopped. However, this means that those areas won’t be vacuumed either.

You can also empty the water tank, take the mopping pad off, and run a “vacuum only” session with the S6 Pure.

If you don’t mind the hassle, the S6 Pure will do. If you like the idea of no-mop zones, then the S6 MaxV is the better choice.

Difference 5: The S6 Pure is cheaper.

Although the S6 Pure is not as fully featured as the S6 Max, it is good enough for those with a smaller home without pets.

The S6 Pure wins this round, it performs well and is a great budget robot vacuum.

Similarity 1: Both models will “auto top-up” when the battery is low.

Both the S6 MaxV and the S6 Pure have a runtime of up to 180 minutes. These two models also automatically return to the docking port to recharge.

With a maximum runtime of three hours, these robot vacuums can cover a lot of ground with just one charge. You can schedule the robot ahead of time, then just let it do its thing while you work, do other chores, watch TV, or go to the store.

Once they start to run low on power, the vacuums will automatically return to their docking station, recharge, then resume cleaning.

Similarity 2: Both have multiple power settings.

Another thing that the S6 MaxV and the S6 Pure have in common is that they have the same set of power settings: silent, balanced, turbo, and max.

You can choose between these different modes to set the vacuuming strength you want for a particular cleaning session.

If you want your vacuum to run more quietly and you don’t need much suction power, the silent setting will do.

The highest settings are typically the loudest, at around 65 decibels. This can be annoying, but won’t be harmful to your hearing.

Similarity 3: Both can map multiple levels The S6 MaxV and S6 Pure also have Roborock’s multi-level mapping technology, which allows them to save the maps of up to four floor levels.

Both these models will only have to scan a level in your home once to be able to save the map in their systems. After the initial scan, they will be able to recognize the floor they’re on. This means that when you set up no-go zones and no-mop zones in a multi-story setup, the robots will know where they are and remember those settings.

Similarity 4: Both give you multiple ways to control the robot

Both the S6 MaxV and the S6 Pure can be controlled in different ways: via the app, voice, and buttons.

The Roborock app allows you to set schedules and zones. You can also use it to remotely program and monitor your robot vacuum. Additionally, the app will show you the scanned maps of your home, giving you a bird’s eye view of the different rooms and areas.

You’ll be able to use voice commands if you have a voice assistant, which can come in handy when you’ve got your hands full. You can create schedules, program zones, and more with simple commands.

Finally, you can also manually program these models using the buttons on the robots.

Can the Roborock S6 MaxV vacuum and mop at the same time?

Yes. It has an onboard water tank that wets the mop that trails behind the vacuum. Once you connect the mop plate to the water tank, the vacuum will be able to start mopping as well. Thus, the S6 MaxV can vacuum and mop your floors clean in each pass.

Can the Roborock S6 Pure vacuum and mop at the same time?

Does the Roborock S6 Pure have LiDAR?

Yes, the S6 Pure has LiDAR, which assists in navigation. It enables the multi-level mapping feature, which allows the vacuum to detect which level of the house it’s on. It also helps this vacuum navigate each level of the home to avoid bumping into walls and furniture.

How long does a Roborock vacuum last?

The Roborock S6 MaxV and S6 Pure, as well as many other Roborock robot vacuums, can run for up to 3 hours on quiet mode. However, this can depend on which power setting you choose because the different settings can consume different amounts of power.

Not quite. The Roborock S6 MaxV and S6 Pure are equipped with washable E11 filters, which are not quite as good as HEPA filters. On the other hand, these filters can capture nearly all of the allergens in your home, such as dust and mold. Because they’re washable, you don’t have to keep buying replacement filters, saving money over the long run.

In many ways, the Roborock S6 MaxV robot vacuum performs better than the S6 Pure. It has stronger suction and can cover a larger floor space. Additionally, it has a few useful features that you won’t find in the S6 Pure.

Of course, the S6 MaxV is also significantly more expensive than the S6 Pure. The only thing the S6 Pure has over the MaxV is its price, giving you the essential functions of a robot vacuum without breaking the bank.

If you are tight on budget, go for the Roborock S6 Pure. Otherwise, the S6 MaxV is the better vacuum.

Ultimately, either of these robot vacuums will take the burden of vacuuming and mopping your floors off of your hands.